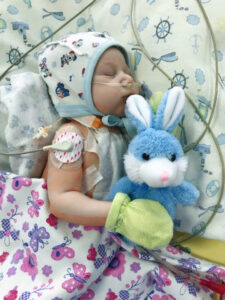 Artur is was born a fighter.

Artur was born on the 1st of September in Luhansk, the easternmost city of Ukraine. Luhansk has been under the control of the separatist rebel group since 2014, and is known as “Luhansk People’s Republic.” This city was nearly destroyed by the war in 2014 and many public services are difficult to obtain, including quality care at hospitals. 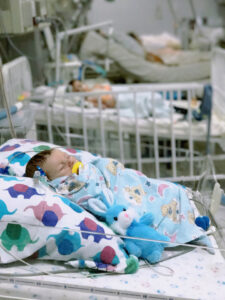 When Artur was 5 days old, his mother noticed he was breathing very fast and turning blue. She took him to the hospital in Luhansk but the doctors were unable to give a definite diagnosis and sent him home. Weeks continued and Artur’s mother became more concerned with her baby’s blue color. Again she went to the hospital and after several tests, the doctor thought he noticed something wrong with Artur’s heart. Finally the doctor in Luhansk called the Kharkiv Cardiac Center. This doctor sent a photo of Artur’s chest x-ray to Kharkiv pediatric cardiac surgeon Olga Buchevna and she recommended Artur be transferred immediately to Kharkiv.

Upon his arrival at the hospital in Kharkiv, cardiologist Daria Kulikova performed a echocardiogram and diagnosed Artur with Transposition of the Great Arteries, plus a tiny ASD and tiny VSD. This heart defect usually must be repaired within two weeks of age, and Artur’s was very severe. He was not getting enough blood to his body or brain, with oxygen saturation levels barely 50%. His surgery would be complicated. Luckily our team arrived three days later and on October 9th, Artur received his life saving heart surgery. Kharkiv pediatric cardiac surgeon, Olga Buchevna, performed this surgery flawlessly with assistance from Cardiac Alliance surgeon Kathleen Fenton. Artur recovered quickly in the ICU and was drinking milk two days after surgery. His serious facial expressions proved to us that this little boy has a strong will to survive. 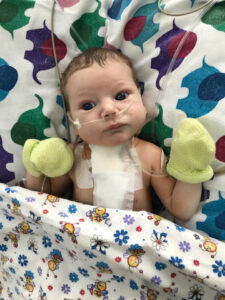 There are babies like Artur around the globe, fighting for their lives, waiting for medical assistance to mend their heart defects before it’s too late.