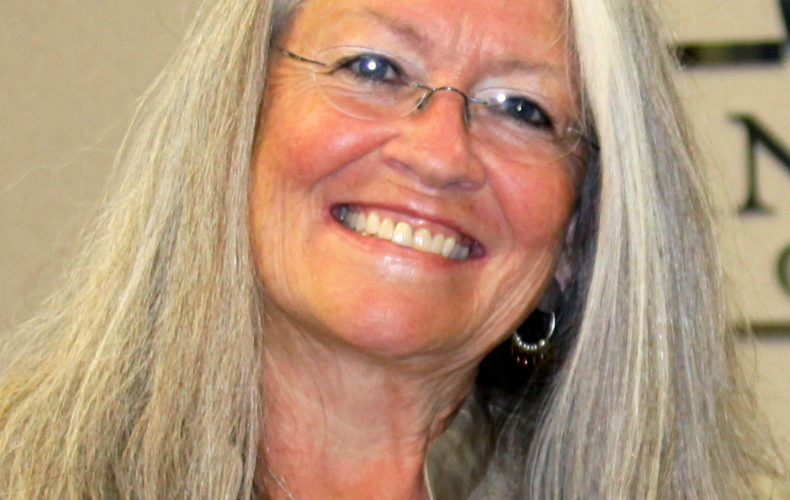 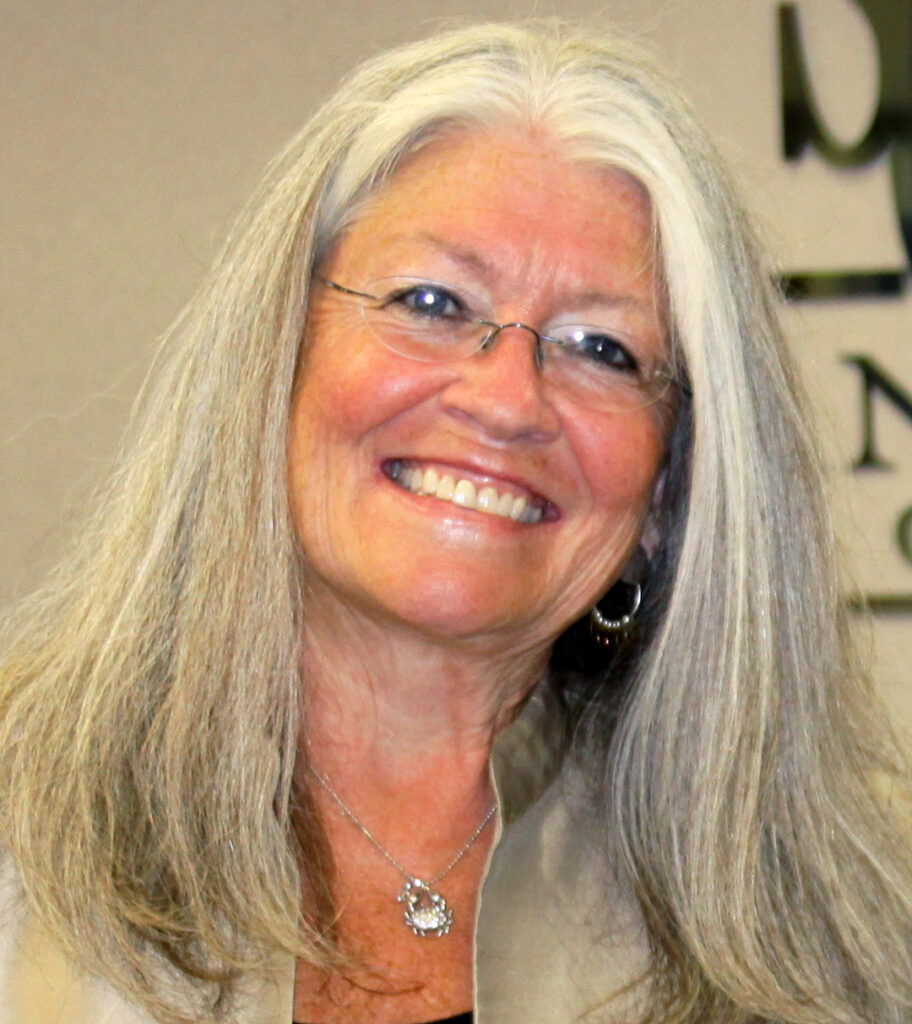 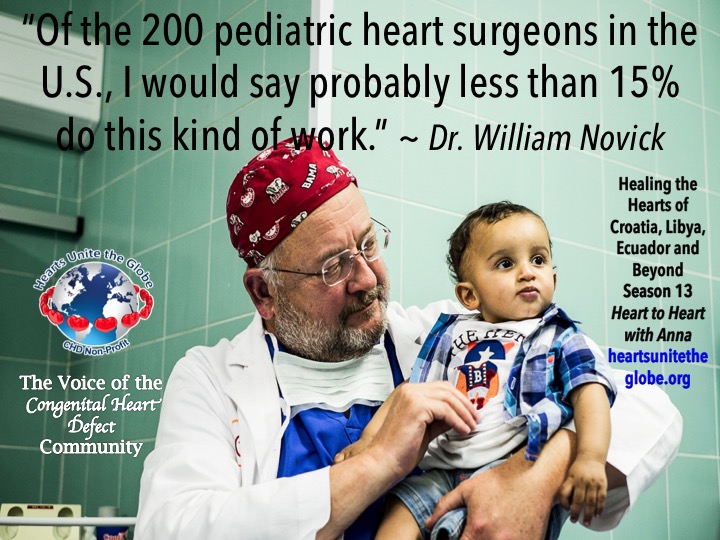 Listen to Dr. Novick’s podcast on Heart to Heart with Anna

Dr. Novick had the opportunity to be featured on the podcast “Heart to Heart with Anna”

Dr. William Novick is a most unusual cardiothoracic surgeon who travels the world mending broken hearts in countries where many of these children would be left to succumb to their congenital heart defects. Together with his team, Dr. Novick does even more than mend broken hearts; however, since he also expends a great deal of time and energy teaching doctors, nurses and support staff in those countries how to care for their heart warriors and he even brings in life-saving technology to leave behind. Tune in to hear about how Dr. Novick got started on this mission, who helps him with this philanthropic endeavor and how you can get involved, too!

Listen to the full podcast here: 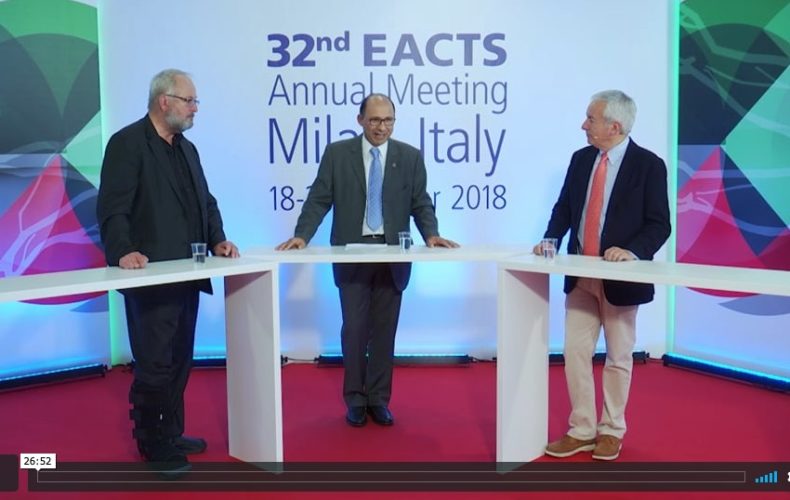 Novick Cardiac Alliance had the opportunity to attend the 32nd Annual Meeting of the European Association for Cardio-Thoracic Surgery (EACTS) in Milan Italy in October 2018. Watch the video below of Dr. William Novick and Dr. Marcelo Cardarelli as they discuss “Lessons Learned in Humanitarian Cardiac Surgery.”

Novick Cardiac Alliance has published a research article in JAMA, a peer-reviewed medical journal published by the American Medical Association. The article is titled “Cost-effectiveness of Humanitarian Pediatric Cardiac Surgery Programs in Low- and Middle-Income Countries”. It describes the cost-effectiveness of providing heart surgery to children in developing countries, but it also accounts for the long-term effects at the individual and societal level.

“The Humanitarian Footprint”, as we describe this the long-term effect, is measured in extra years of life expectancy, extra years of schooling and lifetime income potentially added for the patients treated in our global humanitarian interventions.

It turns out that in 2015 alone, there were 16 932 years of Life Expectancy, 1 484 years of schooling and $67 642 191 lifetime income potentially added to the cohort of patients we operated around the world. We always suspected humanitarian pediatric cardiac surgery was doing something good for our patients and the world. Now we have the data! 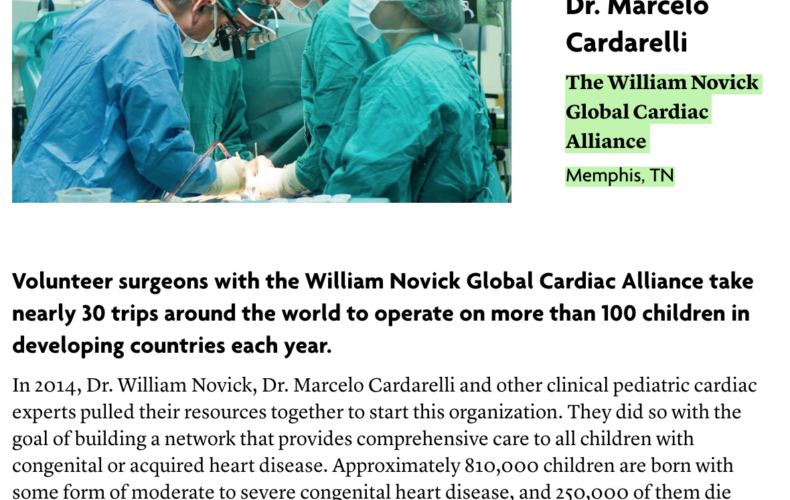 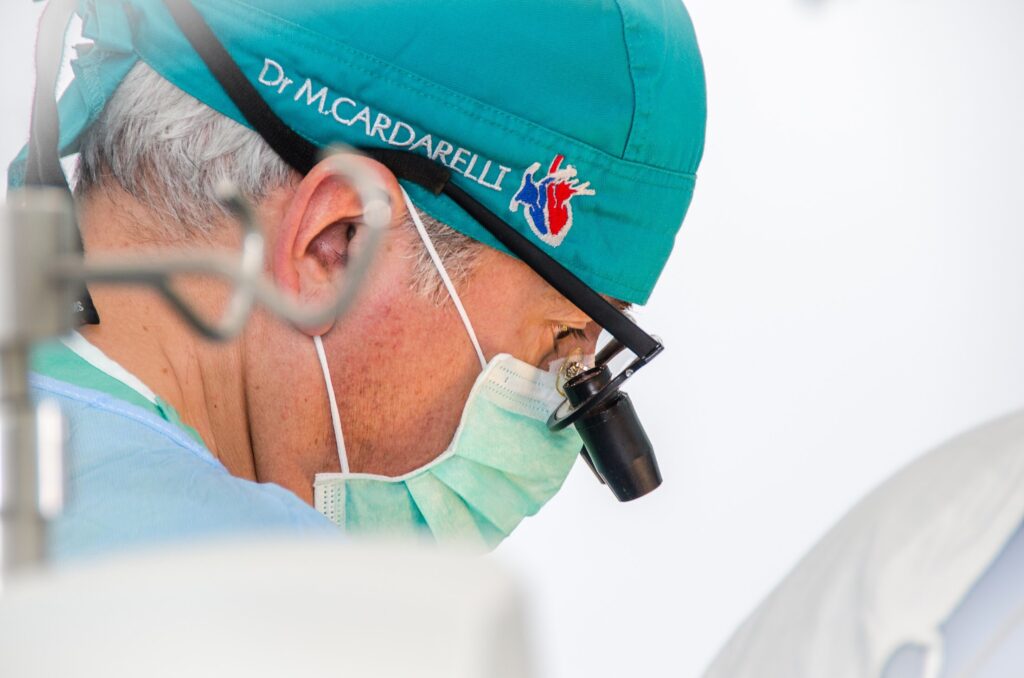 Cardiac Alliance is proud to announce that Dr Marcelo Cardarelli received the honor of being chosen as TIAA Difference Maker 100. He is 1 of 100 extraordinary people who are devoting their lives to improving the world and shaping a brighter future for us all. www.tiaadifferencemaker100.org 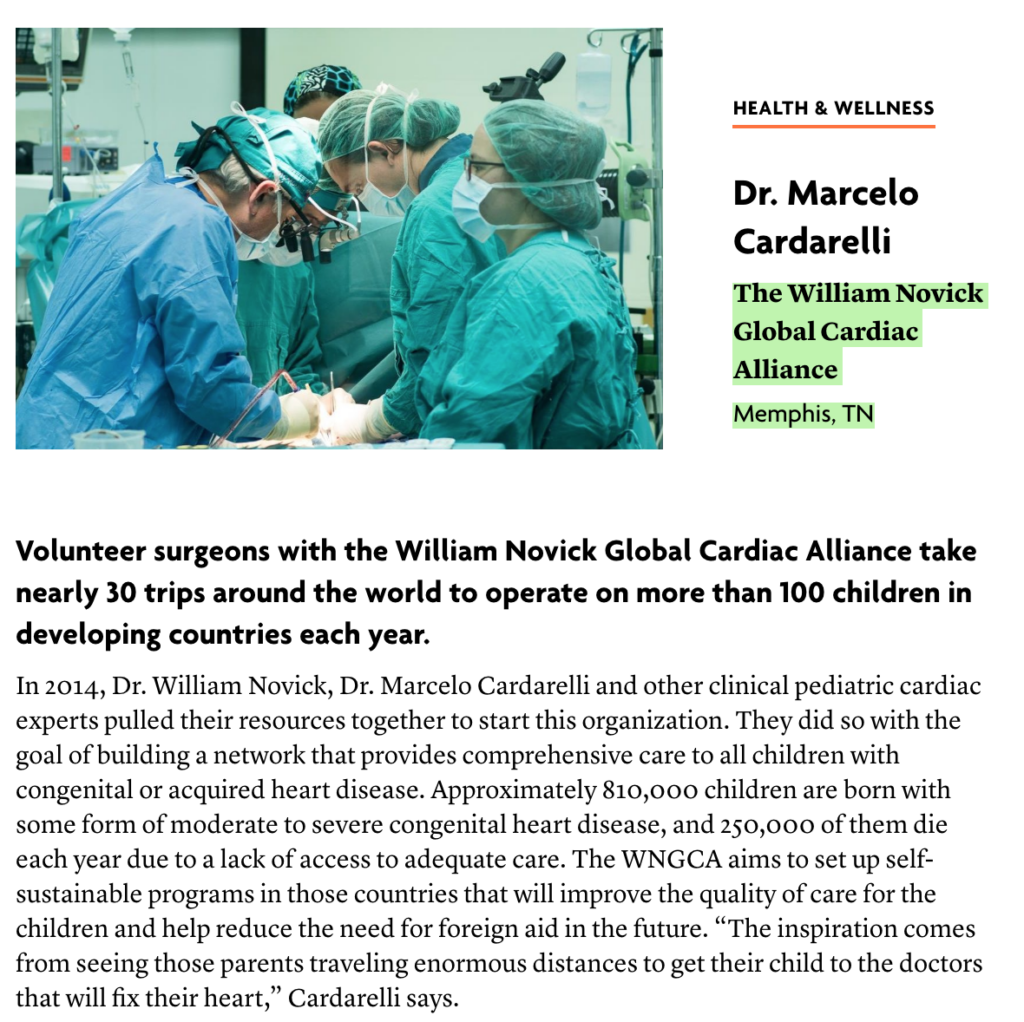 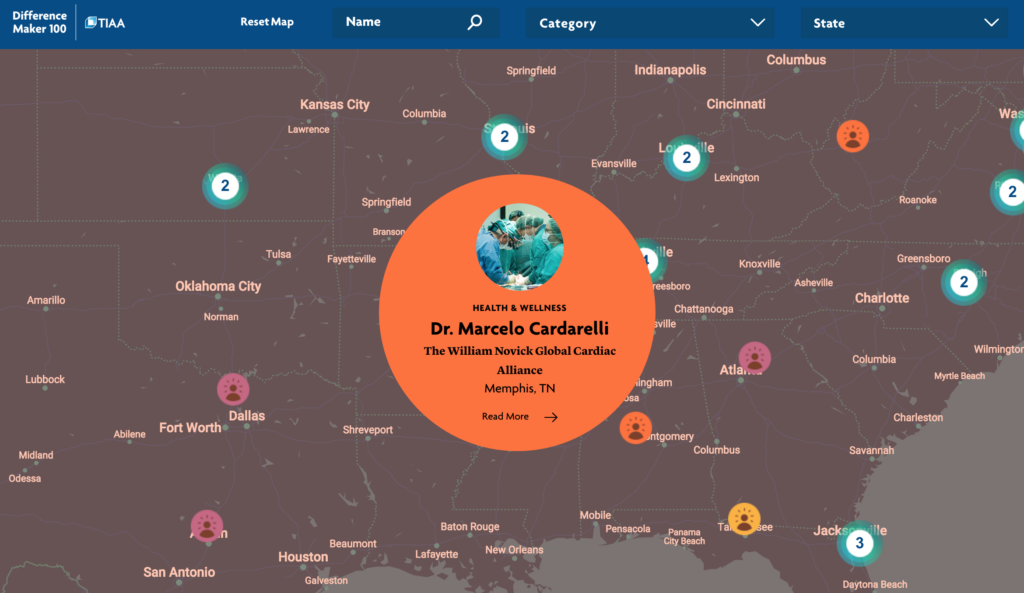 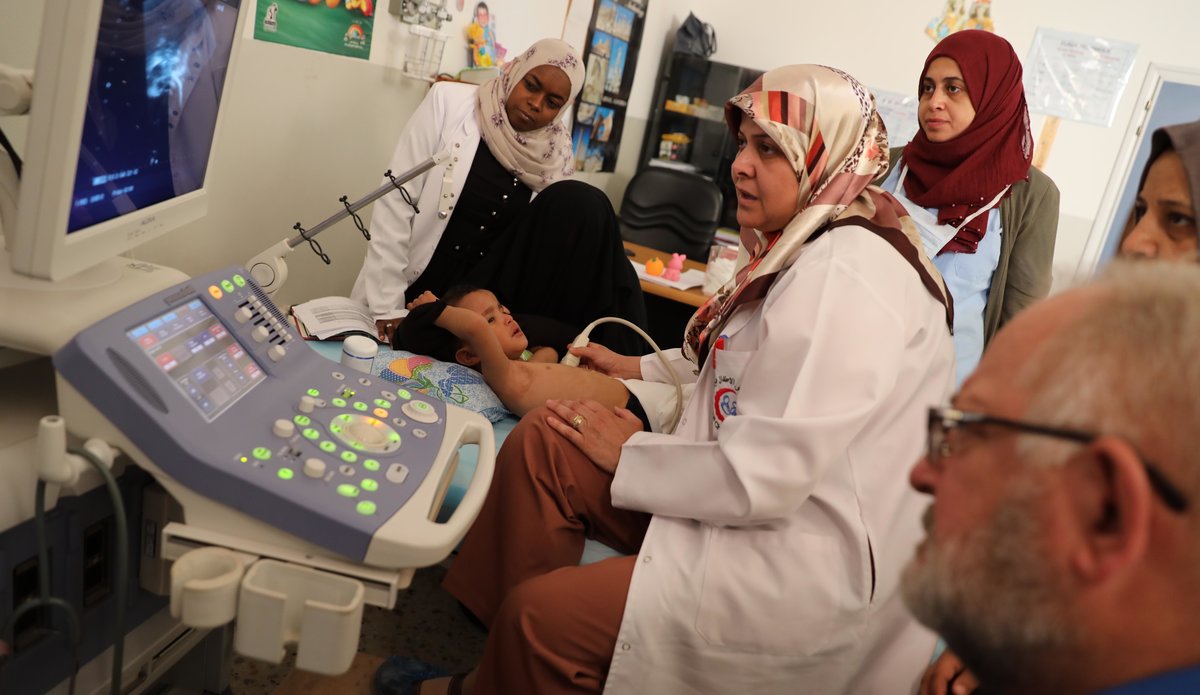 Journalist Jordan Campbell joined our team on several trips this past year gathering information about Dr. Novick and the mission of Novick Cardiac Alliance. The article is featured in Men’s Journal June 2018 edition. 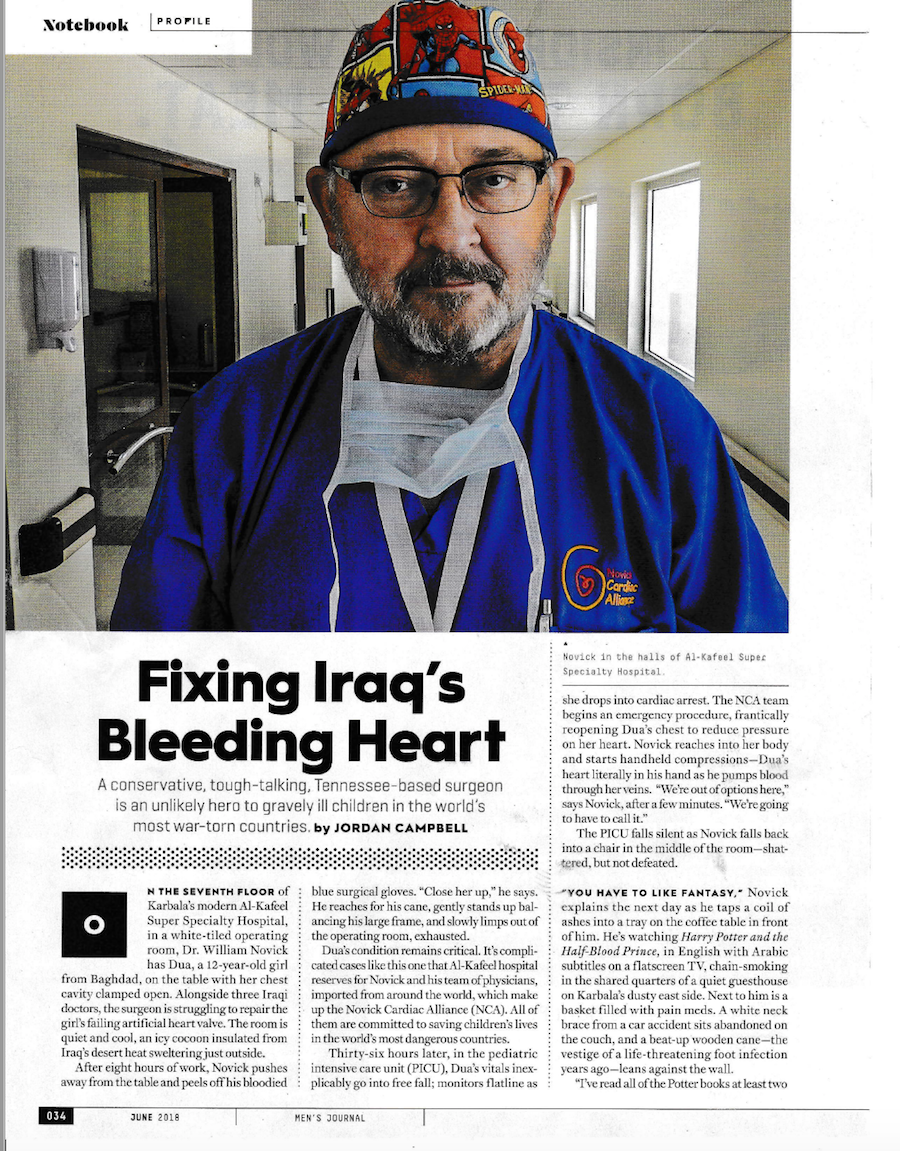 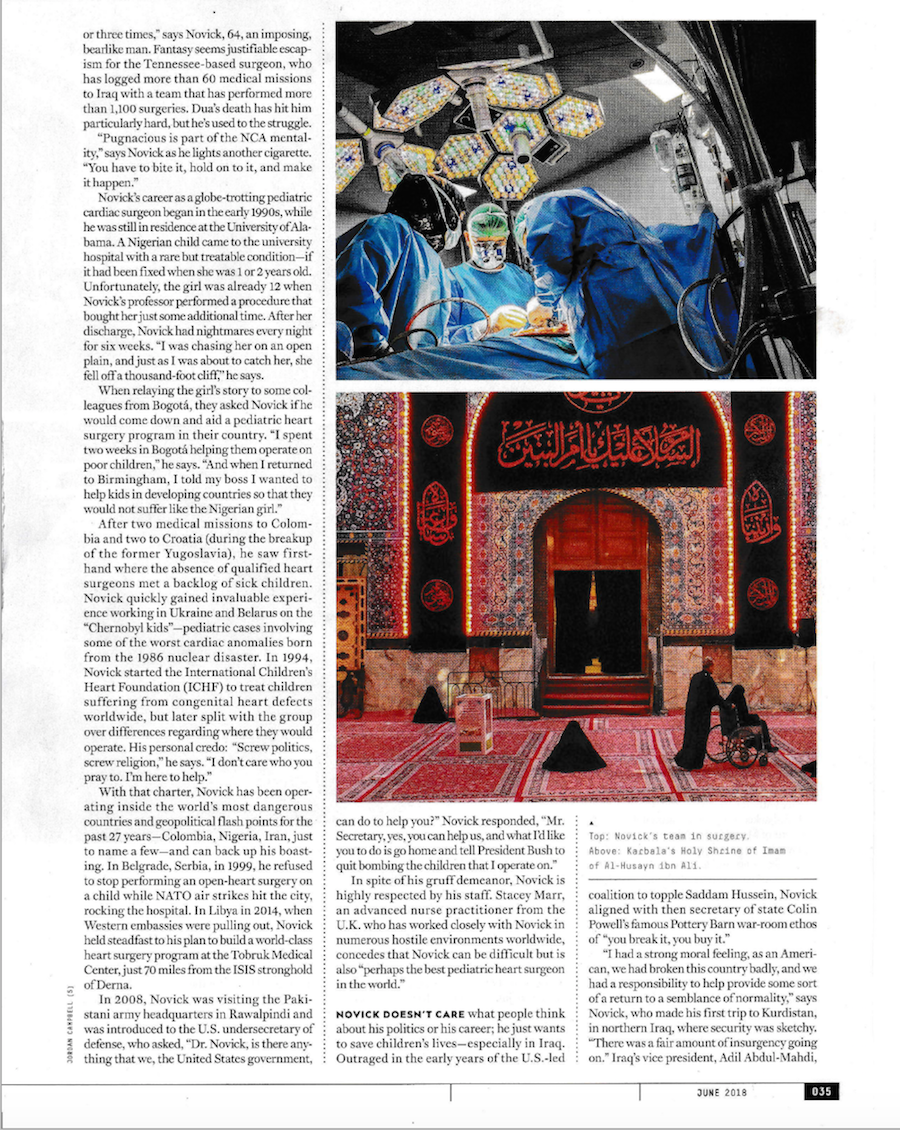 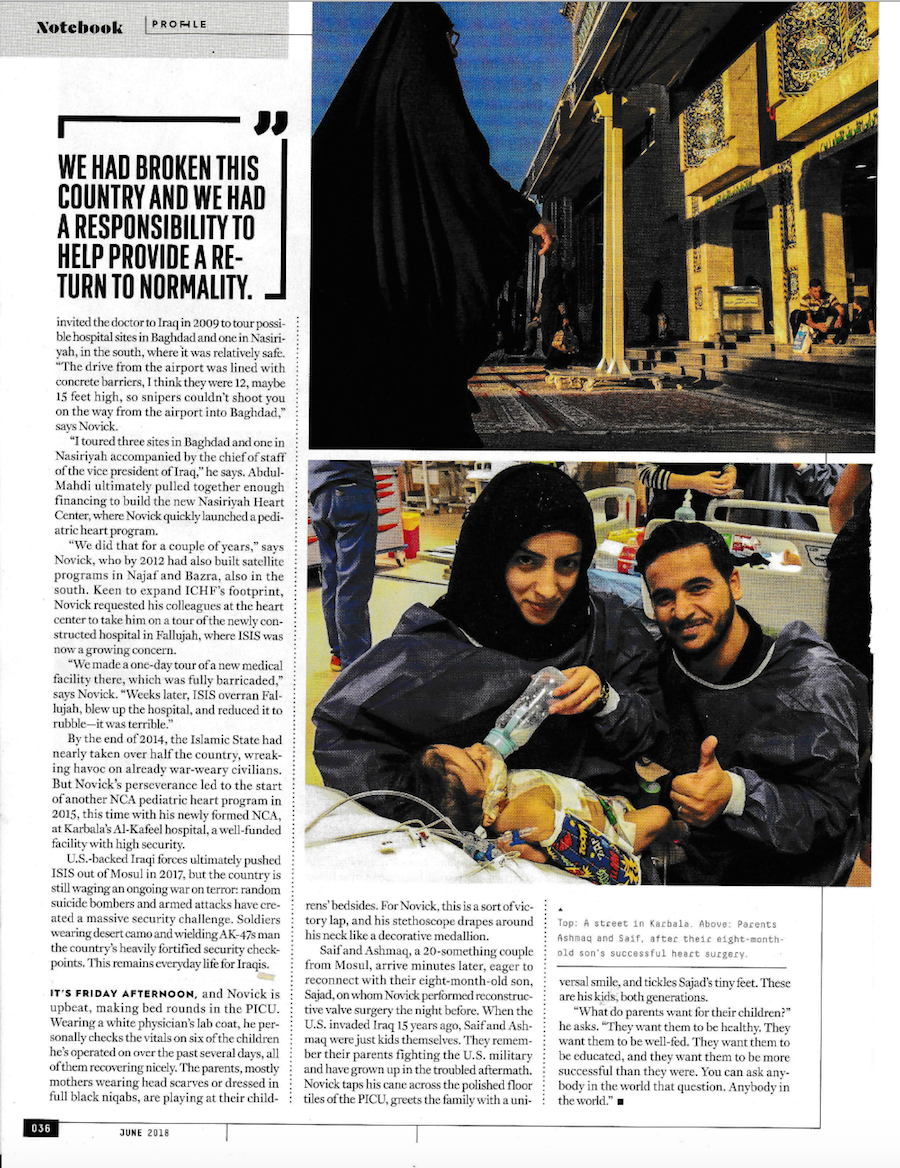 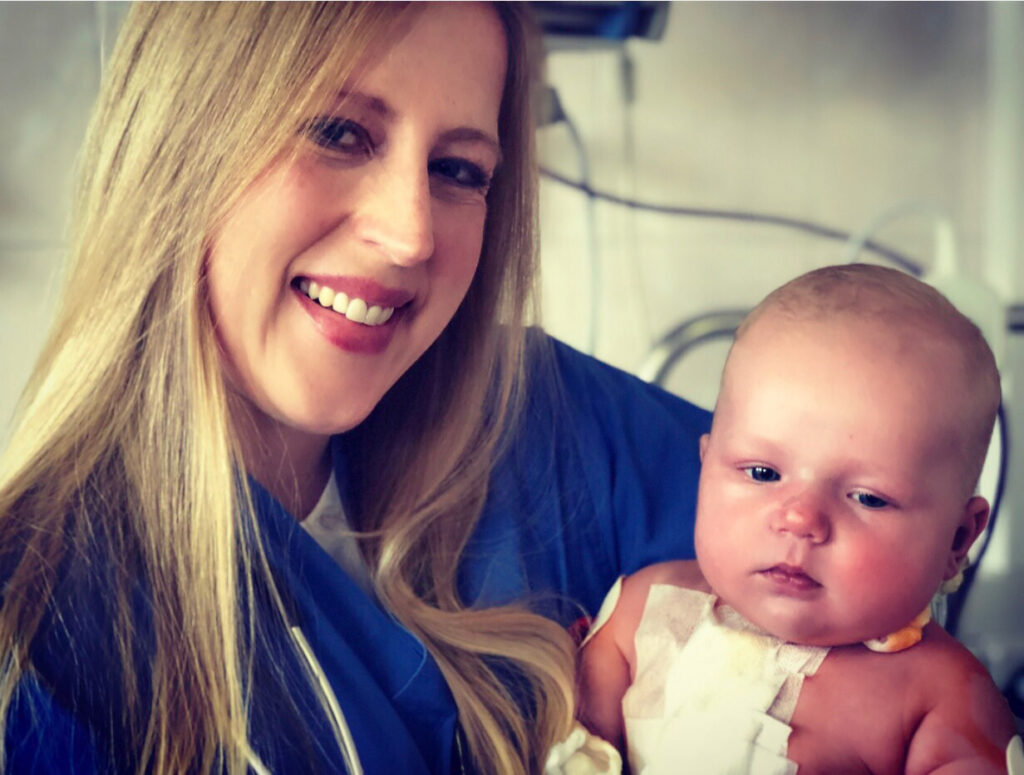 PICU nurse Erin Serrano recently joined our team on her first medical mission trip to Ukraine. Erin shares her unique story about why she began her career as a pediatric cardiac nurse and how volunteering with Novick Cardiac Alliance was a dream her entire life.

My journey to pursue a career in the Pediatric Cardiac Intensive Care Unit began the day I was born. Just a few days after birth, I was diagnosed with a congenital heart defect and underwent multiple cardiac surgeries and procedures to save my life. Volunteering with Novick Cardiac Alliance to help patients and families with similar stories as my own wasn’t a choice, it was something I knew I had to do. It was my destiny.

Coming to Ukraine and stepping into a healthcare system that I knew nothing about was one of the most challenging things I have ever done. After just a few days, I realized that leaving my comfort zone was more than worth it. From the first day that we arrived at the hospital, I learned just how resourceful the staff members had to be, considering their limited medical supplies, equipment, and medications. Imagine being a parent of a child requiring cardiac surgery and you are responsible for providing part of their medical supplies because the hospital simply cannot obtain enough. I was astounded to see the local nurses using resterilized supplies. These supplies would most certainly be thrown away after one use in the United States. I realize that we take for granted the abundance of simple supplies and they are precious items in developing countries like Ukraine. 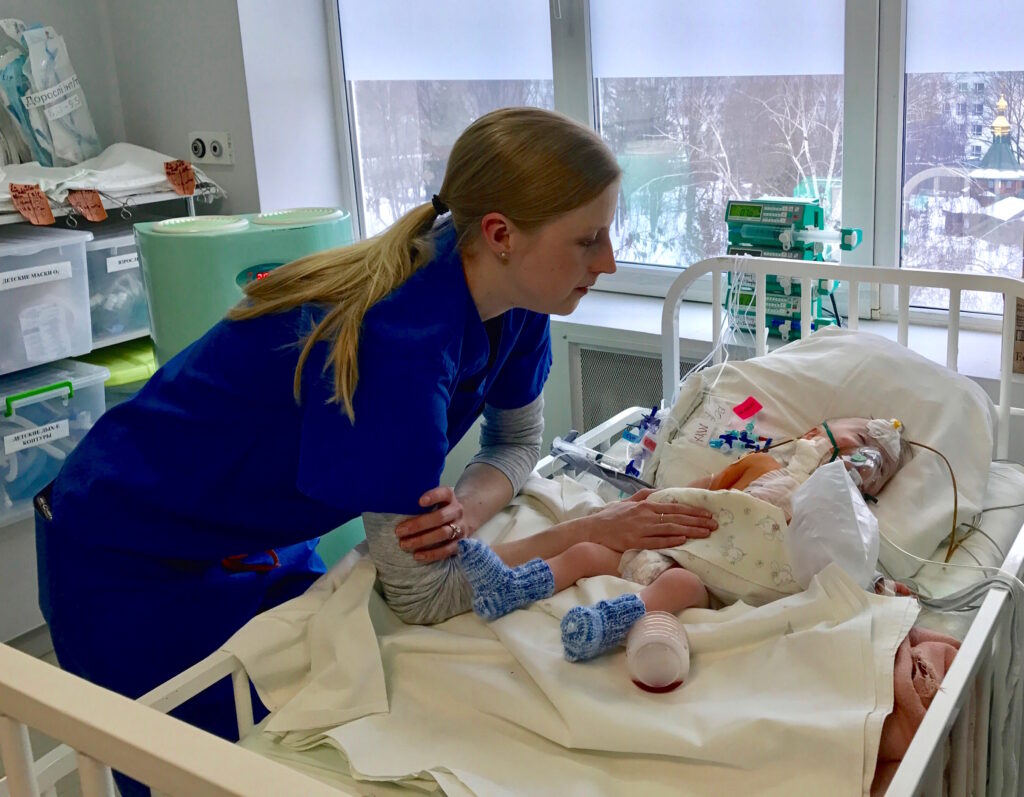 Despite the obvious language barrier that exists, Cardiac Alliance has been successful in educating the Ukrainian medical team in everything from basic ICU care to the most complex cardiac surgeries. To be a part of that education process was the most rewarding part of my trip.

One out of every 100 babies is born with a congenital heart defect and CHD’s are the most common cause of infant death among birth defects. If I have helped just one nurse better their practice while caring for these patients, then I know my time spent was worthwhile. I certainly hope I can volunteer with Cardiac Alliance again and again. Thank you NCA for allowing me to be a part of your incredible mission and to the entire Ukrainian team for teaching me more than I could have ever imagined.

Giving Narges The Gift of Time

When Narges was an infant, her mother noticed  she would become blue when eating or crying. She took her to several doctors throughout Iraq, but nobody could give them any answers. Finally a doctor told them that Narges had a heart defect, but nothing could be done in Iraq to help her. They were encouraged to find help outside the country.

At one year of age, Narges’ parents used all their money to take her to India for medical treatment. Here she was finally given a proper diagnosis. She was born with a complex heart defect, single ventricle with mitral atresia. Even in India, Narges was deemed inoperable.

For years, her family watched their beautiful daughter remain blue and ill, which progressively worsened over the years. Narges’ parents took her to several hospitals in Iraq, hoping that someone could help their daughter. Through the strife of war in their country, Narges’ mother never lost hope. She persevered in her search for a heart surgeon that would take her daughter’s case. Finally, she saw an advertisement from Al-Amal Hospital in Nasiriyah Iraq that announced the arrival of an International pediatric cardiac team that was offering heart surgeries.

Dr Novick met Narges in clinic at Al-Amal Hospital in October 2017. At that time, Narges’ blood oxygen levels were only 70%. Her heart was severely enlarged and the improper circulation of blood inside her heart had been causing lung damage for years. Dr Novick prescribed medication to help lessen some of the damage and requested that Narges return to the hospital for evaluation when our team returned the following month. 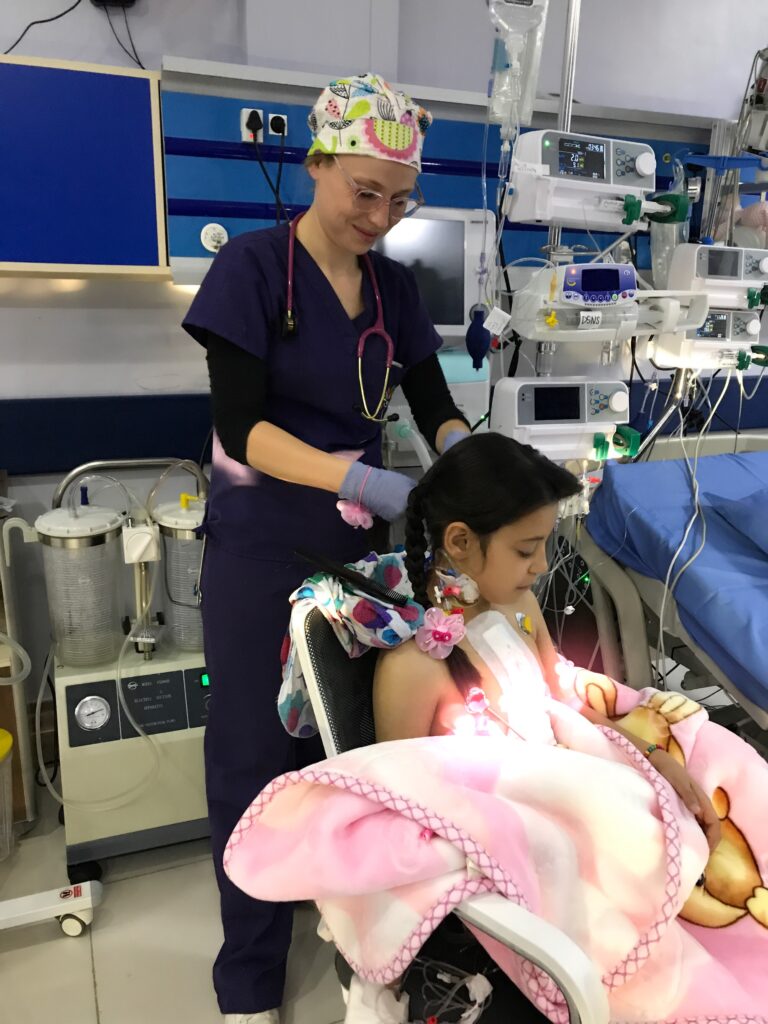 In November, Narges and her family returned to Al-Amal Hospital to met with our team. Narges’ heart was still severely enlarged and her only option was a palliative surgery that would prevent further lung damage. The hope was that this surgery would improve her quality of life. Dr Humberto Rodriguez performed this surgery and Narges recovered quickly in the ICU. Our team was impressed by her determination, asking to get out of bed the day after her surgery. She wanted to get cleaned up and loved having her hair brushed and braided by nurse Emily. We witnessed the fight inside this young girl, and we understood where she gained her strength from, her mother.

Narges’ mother emotionally described how difficult it was to watch her daughter struggle to breathe, and how she fought to find proper treatment. Both of her parents really understood the severity of their Narges’ heart disease. They were so thankful to our team for offering her this chance to simply have more time in life. 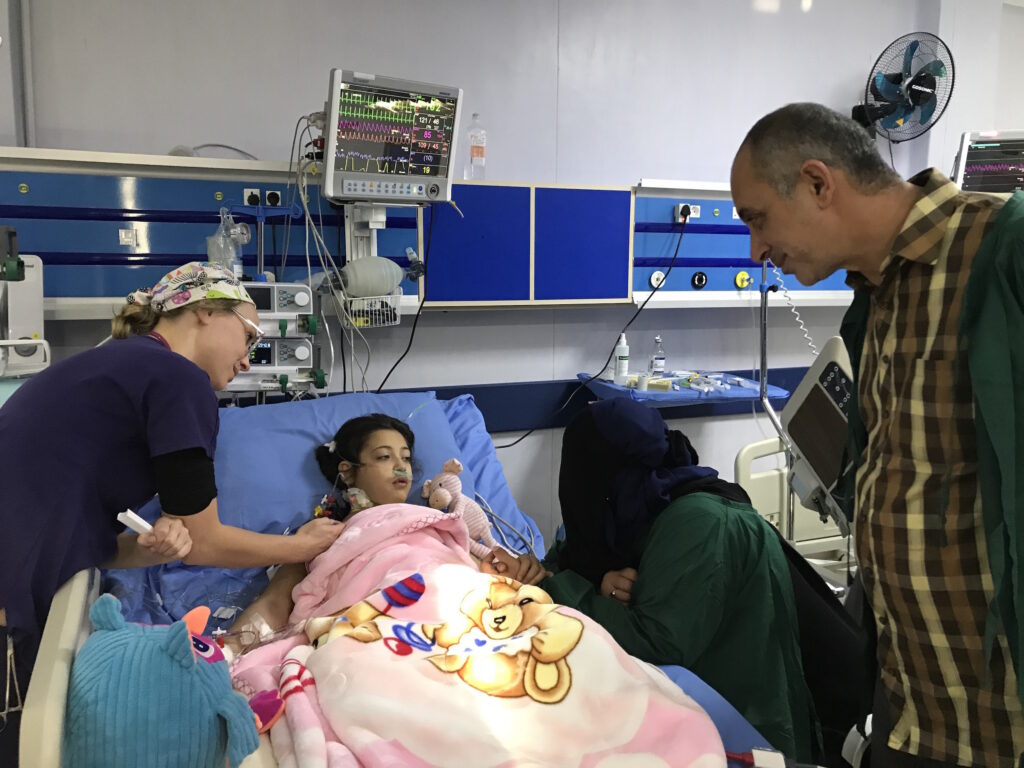 Sometimes, we cannot completely repair a child’s heart, especially those children who have lived for many years with complex defects. This is why we aim to educate cardiologists and pediatricians to diagnose and plan treatment for these children when they are young. For now, Narges will continue to go to school and spend time with her family. This gift of time is what matters most to the families who are barely grasping at hope.